In 2009 when a group from First United Methodist Church in Wichita, Kansas went to Guatemala to attend language school, they were struck by the poor living conditions of most indigenous Mayan people. It was easy to see that a huge concern for the health and well-being of the Guatemalan families was cooking on fires in their windowless small kitchens.

Having learned from United Methodists missionaries in Mexico how to build fuel-efficient stoves, they talked about helping build stoves for the local Guatemalan people. But stove building methods and materials needed in Mexico were not adaptable to Guatemala. They learned about an American who had lived in Guatemala for 18 years and had developed a fuel efficient stove that could be built in Guatemala using local materials. Besides being fuel efficient, the stove got the cooking fire off the ground and it vented the smoke out of the house. It also could be built for about $120. But this is a big price for people for whom six dollars a day is a good wage. 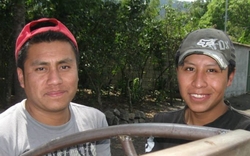 Felipe and Josue
They contacted the American stove builder and through him were able to connect with two young Guatemalan men who were trained to build this specific style of stove. With this, a project named "Stove Builders of Guatemala" was started officially in 2011. The project enlisted and paid these two young men, Felipe Archila and Josue Esquit, to train other local stove builders. Since 2011, work team members have returned to Guatemala regularly, working along side local stove builders, helping to build additional stoves both through hands-on and financial help. There are now 14 stove builders building stoves in 7 towns. In 2017, the First United Methodist Church of Richardson, TX began administering the program. At present, almost 2,000 stoves have been built for the Mayan people!
Powered by